Digital currencies, payments, the cashless society – the world of money is changing. Naresh Aggarwal looks at some emerging scenarios

Over the past few years, I’ve come across a number of reports on the future of the financial markets exploring what the changing dynamics might mean for businesses, citizens, regulators and governments.

The Bank of England’s Future of Finance report from September last year, for example, is a comprehensive exploration of the forces shaping the economy and what that means for the world of finance.

Others use personas to tell a story. Swiss payments company SIX, for instance, has recently published a 50-page white paper. In it, you can follow the antics of Felix, whose interactions take place largely in the digital space. The paper itself is well worth a read, but if you don’t have the time, my personal observations follow.

The report considers seven different futures that would impact the cash infrastructure and service space, and ranks them according to likelihood. These scenarios all have profound impacts for the treasurer and, even if some seem unlikely, the paper gives a sense of what the future may look like.

Cash as a means of payment falls by 40-70%, as people demand immediacy in everything they do. At the same time, cash continues to be perceived and widely used as a store of value.

Cash holdings have dropped by 80% as cash is no longer the dominant means of payment, and digital money and assets have increasingly displaced cash as a safe store of value.

Cash may continue to be used as a means of payment by the non-digitally inclined and by digitally savvy people for self-regulation, for its tangibility, for teaching the value of money and out of security and privacy concerns.

Some people continue to maintain cash holdings as a back-up means of payment for ‘blackouts’ or times when networks are interrupted.

People can choose where to hold their digital currencies – in an account with the central bank or a commercial bank.

They may continue to use commercial banks to hold their digital currency and assume the counterparty risk in exchange for a higher interest on their deposits.

Non-sovereign currencies become the dominant form of money. These currencies are not pegged to a sovereign currency or basket, but are under the full control of their issuers. Examples include Libra, M-Pesa and Tencent’s QQ coin.

5. A cashless world is born

There is no such thing as money anymore and no consensus on an asset as a medium of exchange, store of value or unit of account.

Employees can ask to be paid directly in those assets that they prefer as a store of value.

Digital services take the form of open-source code stored on these permission-less distributed ledgers and decentrally executed by participants to these ledgers, which are known as decentralised applications, or DApps. 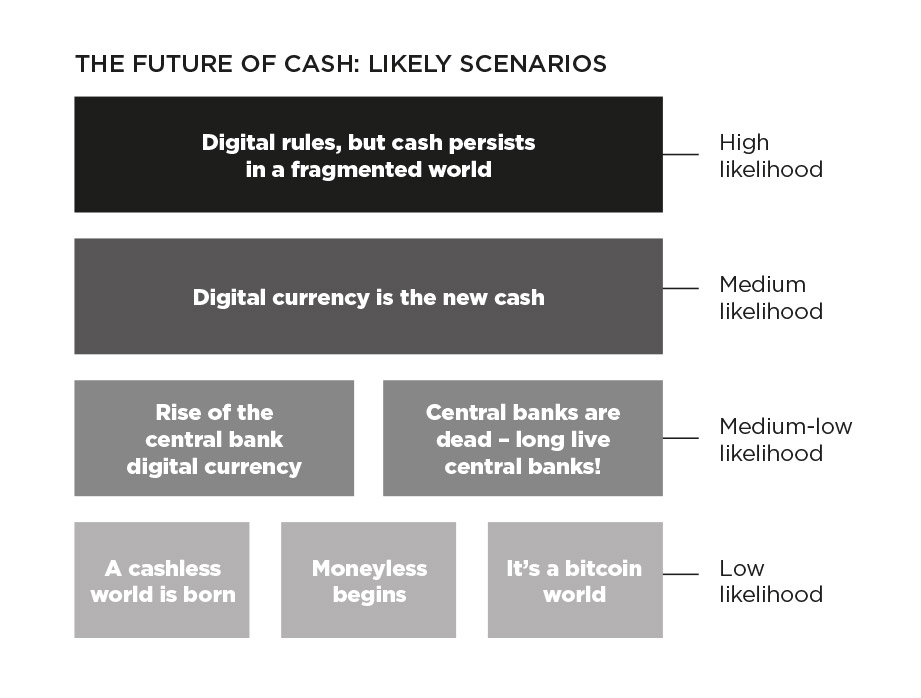 How likely are these scenarios? We already see elements of many of them operating in practice or as trials. We see debates about the value of cash and the changing economic models for ATM machines.

Whichever scenario or hybrid we end up with, citizens and businesses will need to consider three, key factors:

The debate over the use of cash and digital will continue to evolve over the coming decade (as it has over the past one).

Policymakers and regulators will need to make sure that any changes reflect the needs of both the technically savvy as well as those less comfortable or able to access digital services.

Even if not payment champions, treasurers will need to stay abreast of these developments to make sure their businesses and their liquidity management processes continue to be fit for purpose.

This means being able to assess the impact of developments in the payments space and recognising when some may be detrimental.

The policy and technical team are active participants in working groups run by the Bank of England and pay.uk, and welcome any concerns that treasurers may have over proposed changes to the UK payment landscape.

Naresh Aggarwal is associate director, policy and technical, at The Association of Corporate Treasurers